A digest of EMSC Program News and Activities

In an effort to align the messaging and communication of activities in the EMS for Children space and to promote knowledge translation uptake by EMSC providers including prehospital personnel, nurses, doctors, and others, a dissemination committee was launched about 18 …

Prevent Problems that Impact Your Workload: Collaborate & Combat the Flu

Collaborations among child health professionals and stakeholders are critical to protect children. As influenza (flu) activity continues to rise, we can all get vaccinated to protect others, support influenza vaccination clinics and hospital overflow facilities, and describe community strategies to …

The US Emergency Care System is “poorly prepared for disasters”. A 2013 report titled Preparedness, Response and Recovery: Considerations for Children and Family Summary, acknowledged that “current state and local disaster plans often do not include specific considerations for … 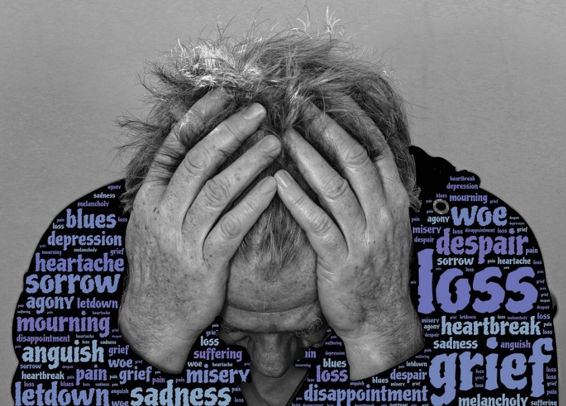 Check out the following:

Ø Centers for Disease Control and Prevention

Ø Office of the Assistant Secretary for Preparedness and Response

The National EMS Quality Alliance (NEMSQA) announced in October the release of revised EMS Compass Measures. The updated NEMSQA web site describes the measures in detail and includes a technical information package necessary for quality, research, and IT professionals to extract data and implement measure utilization. Each measure is presented with a narrative, which tells the story of how the measure is significant and why it was developed. They hope that the narratives serve to support the value of using the measures for performance improvement in every type and size of EMS agency.

The EMS Compass Measure Set was originally developed by the National Association of State EMS Officials, a project funded by the National Highway Traffic Safety Administration (NHTSA). After a rigorous research and development period, fourteen candidate measures were released for public testing in 2016.

In an effort to continue work on these important measures, NHTSA awarded the American College of Emergency Physicians (ACEP) a contract to carry forward the EMS Performance Measures initiative. This included the tasks of reviewing and revising the candidate EMS Compass Measures and, out of this initiative, the National EMS Quality Alliance (NEMSQA) was formed. Now an independent organization, NEMSQA has adopted its own rigorous measure development process that will be used to create measures for improving EMS care. Over the past seven months, the NEMSQA measure development process, including phases of research, specification, and testing, was applied to the candidate EMS Compass Measures, and informed revisions and re-specifications to the measures.

In August 2019, the NEMSQA Measure Development Committee and Board of Trustees approved eleven of the re-specified Compass measures for continuation in the revised measure set. NEMSQA finalized these measures and developed accompanying resources that stakeholders feel will be valuable to the EMS community.

“The updated website provides everything an EMS quality improvement manager needs to start basic data measurement for improvement of patient care. We hope to build a network of quality professionals who will utilize and provide feedback on these measures, so we can continually improve the measure set as well as our EMS systems,” noted Brooke Burton, NEMSQA Trustee and Communications Committee Chair.

To learn more about the revised EMS Compass Measures, including information on specific measures, visit http://www.nemsqa.org/completed-quality-measures/.

Already known as the leader in emergency nursing education and skills development resources, the Emergency Nurses Association (ENA) announced in October the acquisition of the Emergency Severity Index (ESI) five-level emergency triage system. The ESI is used by nearly every emergency nurse in the United States.

Launched in1998, ESI is the leading triage resource relied upon by nurses to assess patient acuity based on their presentation in the emergency department (ED) and the expected level of care the patient will require. ESI is recognized as a powerful tool in the emergency department which has successfully and efficiently enhanced patient flow and safety at triage. ESI’s data also supports ED operational decisions, quality initiatives and clinical research.

"The opportunity to acquire ESI was a great fit for ENA, the premier source for education and resources for emergency nurses,” said ENA President Patti Kunz Howard, PhD, RN. CEN, CPEN, TCRN, NE-BC, FAEN, FAAN. "ESI has been
utilized by stretcher side emergency nurses since its initial development. Guided by ENA’s high quality standards. ESI will evolve and improve the ability of emergency nurses to accurately triage patients and predict resources needed for care."

"ENA prides itself on being the ultimate resource for emergency nurses. Our courses and toolkits provide nurses the essential skills they need to be successful. Acquiring ESI gives ENA the opportunity to directly impact patient outcomes by enhancing the way emergency nurses set a course of treatment at triage," Nancy MacRae, ENA Chief Executive Officer said. "With ESI, ENA's commitment to care has never been stronger.

Following the acquisition of ESI, ENA will immediately begin exploring ways to update the triage tool with a goal of improved patient care and enhancing how nurses initially assess patients in the ED. ENA will also begin efforts to expand ESI's use internationally.

The National Center for Fatality Review and Prevention (NCFRP) is pleased to announce the publication of a new guidance, Reviewing Deaths of Children in Disasters and Mass Fatality Events. This guidance provides working definitions for fatality review professionals to help them understand disasters, the types of deaths attributable to disasters, best practices in reviewing disaster-related fatalities, the partners teams should engage, additional documentation that supports effective review in these types of cases, and community resources for disasters and community care.

The National Center extends its most sincere thanks to disaster preparedness and responses colleagues at the CDC, and fatality review partners from Clark County, Nevada; Connecticut; and Puerto Rico for their needed input in the crafting of this resource.

This is a product from the HRSA / MCHB supported National Center for Fatality Review and Prevention. The guidance can be found on the National Center’s website. An accompanying taped webinar will soon be posted on their site as well. 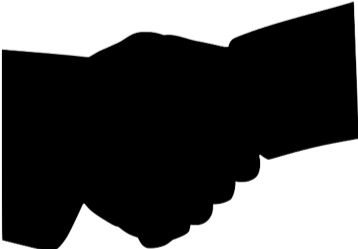 Health Resources and Services Administration (HRSA) of the U.S. Department of Health and Human Services met with the EMS for Children (EMSC) Innovation and Improvement Center, the National EMSC Data Analysis Resource Center, the Data Coordinating Center and Atlas/Deloitte staff to discuss ongoing and future national and federal EMSC projects in Rockville, MD from October 15-18, 2019. On an ongoing basis, HRSA convenes the centers to collaborate on and coordinate EMSC project activities.

The National Association of EMS Educators (NAEMSE), with the RedFlash Group, have been working to revise the National EMS Education Standards and Instructional Guidelines. A team of proven EMS educators and two advisory physicians, Drs. Kate Remick and Josh Stilley, were selected early in 2019. To date, the team has met twice. Leadership has made numerous presentations in 2019 to hear public comments and suggestions for the project. Specifically, a presentation was delivered and input was solicited at the EMSC Grantee meeting in Washington, DC in August.

At the May meeting in Pittsburg, PA, the team met for the first time and reviewed the recently released 2019 National EMS Scope of Practice Model (SoPM) and comments from various stakeholders, including EIIC. Based on the comments received and the SoPM changes, the team began its work focused on the following topics: Provider Well-Being, Behavioral Health, Cultural Sensitivity/Awareness, Public Health roles, AEMT Accreditation, Pharmacology, and Airway/Ventilation/Oxygenation. They left that meeting with assignments.

The second meeting was held in Washington, DC in October. The team heard presentations from a member of the EMS Agenda 2050 Technical Expert Panel, was updated on the SoPM and heard two presentations from the National Registry of EMTs (NREMT). NREMT presented findings from their recent EMS Practice Analysis study and research regarding national EMS education program performance. The team received additional public comments and input on the Education Standards revision process and the revision of the Instructional Guidelines. Finally, members reported their progress on assignments.

Based upon public and stakeholder comments, the team deliberated several new topics that require adjustment and/or revision. These areas included the role of EMS education simulation and shadowing (with pediatric impacts), EMS operations, and adjustments to the content of pediatric/geriatric areas. The team created a task force to study and make recommendations for simulation and shadowing. Team members will continue to work the EMS operations component.

The current direction for the pediatric/geriatric sections are to embed these areas within the appropriate sections throughout the document. Instead of being isolated sections, attention will be brought to these populations repeatedly as pediatric and geriatric content to be found in all areas of the Education Standards. The idea was discussed and devised in conjunction with EMSC buy-in, support, and advisement.

NICHD recently published a Request for Information (RFI): NICHD Vision for Multisite Clinical Trials Infrastructure (NOT-HD-19-041). The purpose is to solicit input from the public on its vision for supporting multisite clinical trials infrastructure. It is important for NICHD to receive input from the field. Input should be provided by Friday, December 20, 2019.

HRSA-20-042 Centers of Excellence in Maternal and Child Health Education, Science, and Practice -- Apply by January 8

NEDARC has curated a folder of royalty-free images and videos for use by EMSC Program Managers for use in creating Adobe Spark and PowerPoint presentations. Please contact your NEDARC TA liaison for a download link. 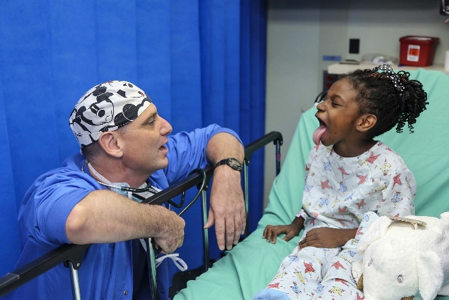 In last month’s TechTalk NEDARC built on what was learned at the Adobe Spark Workshop in August 2019. More advanced skills such as sharing what projects, using the microphone to record narration, editing uploaded videos and splitting video clips across multiple Spark Video slides. WEBINAR RECORDING can be viewed here. 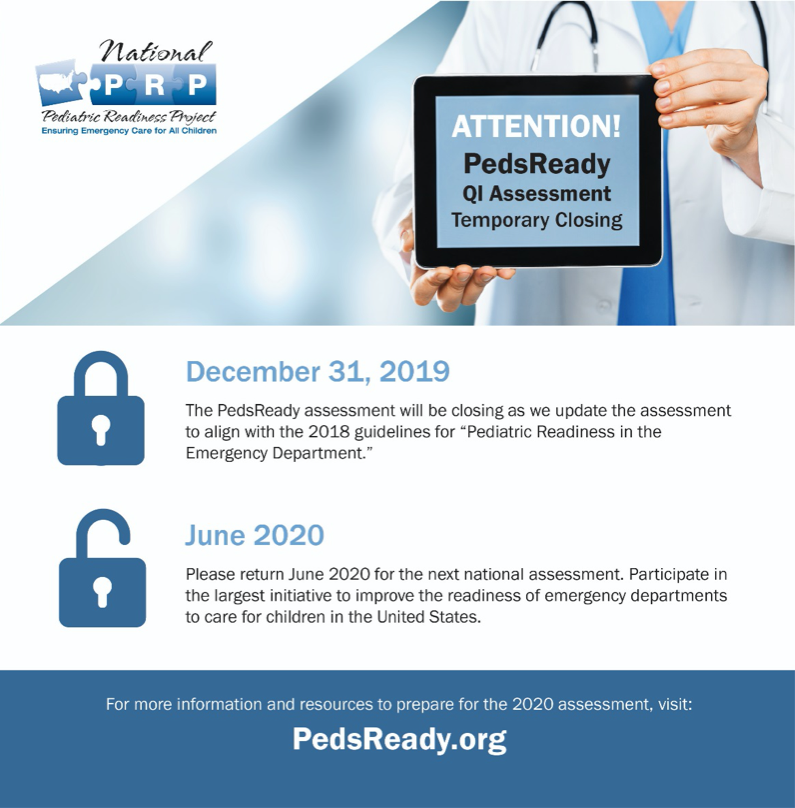 Notice of Funding Opportunity (HRSA 20-037) for the Emergency Medical Services for Children Innovation and Improvement Center has been released by HRSA.