Fun and Games to Break the Ice

Engaging an EMSC Advisory Board can sometimes be a challenge. Louisiana’s State Program Manager, Amanda Perry, M.Ed., NRP decided to shake things up a bit at a recent meeting. She chose a communication activity to help the Board warm up to one another in a fun, engaging, and competitive way, which included a purpose too. The activity set the tone for the meeting right off the bat as friendly, welcoming, and not taking themselves too seriously. 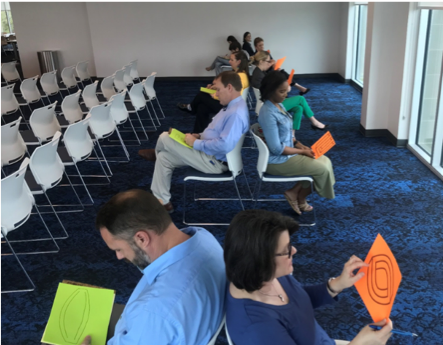 Members chose their own partners, but it had to be someone they didn’t know well. They agreed on who was in which role -- artist or describer. Sitting back to back, the “artist” had a blank cardstock (green in pics) and a marker. The “describer” had a geometric shape on orange cardstock. The shape was given to the describer so the artist could not see it. The describer had to give the artist instructions/descriptions about the shape. The artist had to draw the shape to scale based on the description given to them. Neither was allowed to say “this is hard.” Either could ask any clarifying question they wanted of the other. Neither were allowed to peek at the other’s cardstock.

With 10 minutes to complete the activity, other instructions included: 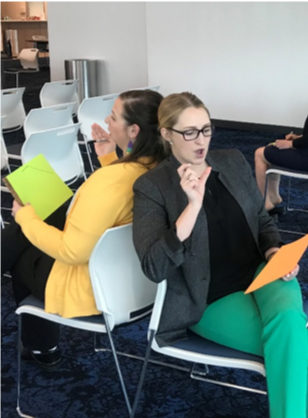 Upon completion of the task, the group reconvened and responded to three questions (a few responses included):

The result was free-flow conversation throughout the rest of the meeting and it was effective! The Board generated some great ideas, and they made some decisions necessary to move the needle forward in some key areas! 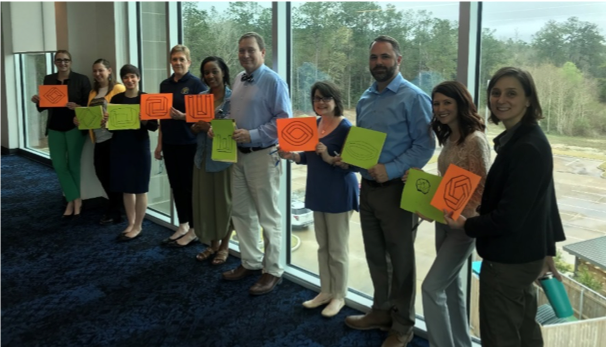