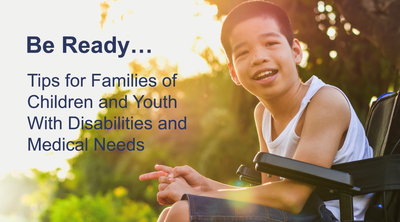 It is well recognized that truly effective disaster preparedness requires considering the needs of all individuals, including children. In honor of September as National Preparedness Month, we are highlighting some of the Emergency Medical Services for Children Innovation and Improvement Center’s (EIIC) Disaster Domain recent and ongoing work. The EIIC Disaster Domain works in partnership with disaster preparedness experts from the American Academy of Pediatrics (AAP) and the Assistant Secretary for Preparedness and Response (ASPR)-funded Eastern Great Lakes Pediatric Consortium for Disaster Response (EGLPCDR) to promote the inclusion of children into disaster plans across the continuum of care.

As part of this year’s All-Grantee Meeting, the Disaster Domain hosted three sessions devoted to pediatric disaster preparedness, described below:

Pediatric Experiences from the Past Year and Future Solutions (Aug. 31)

The first plenary of the meeting opened with Family Advisory Network (FAN) member Melissa Winger’s story about the heart-wrenching consequences of delayed care that resulted from the no-visitor policy of her son’s group home. Disaster Domain Co-Lead Brent Kaziny, MD, a pediatric emergency medicine physician at Texas Children’s Hospital, then shared his account of the unique challenges children and youth with special healthcare needs (CYSHCN) faced during the Texas winter storm. The remainder of the session was devoted to an in-depth discussion of how to better meet the unique needs of CYSHCN during disasters. View the recording here.

Drills and exercises are an essential component of disaster preparedness. During this session, the EIIC Disaster Domain walked participants through the basics of disaster drills and showcased the several virtual exercises the EIIC Disaster Domain helped support over the past year. This was followed by a discussion of how state/territory EMSC programs can get involved and advocate for the inclusion of pediatric considerations in drills in their region. View the recording here.

The final disaster session of the meeting showcased two state EMSC programs who have partnered with their local AAP chapters and other pediatric disaster preparedness experts in their region to promote pediatric disaster preparedness. Norma Campbell, EMSC Georgia program director, first described how she and Natalie Lane, MD, of the Augusta University Health Center, promote pediatric preparedness in their state. Susan Fuchs, MD, FAAP, FACEP, Illinois EMSC program director and a physician with Lurie Children's Hospital of Chicago, and Evelyn Lyons, RN, MPH, EMSC Illinois program manager, then described the many disaster initiatives that the Illinois EMSC program has helped develop over the past 20 years. If you are interested in connecting with local disaster experts in your region, email disaster@emscimprovement.center. View the recording here.

The Disaster Domain is gearing up to support the Regional Pediatric Pandemic Network, which was recently funded by the Health Resources and Services Administration and brings together five children’s hospitals. The purpose of the network is to prepare the nation and its children's hospitals to be ready to care for children in everyday settings, disasters, and global health threats. To learn more about the new network, read the Aug. 31 announcement.