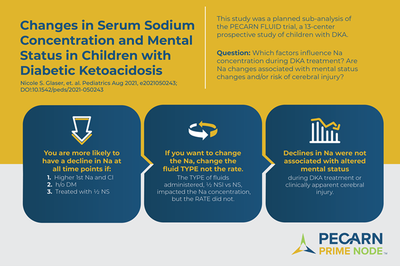 Retrospective studies, which look back at data already collected, showed associations between declines in sodium during DKA treatment and risk of cerebral injury. But in retrospective studies, monitoring of mental status in patients is highly variable as is the timing of measurements of electrolytes.

“I appreciate these results as a physician taking care of children in the emergency department,” says Julia Magana, MD, co-chair of the PECARN Dissemination Working Group. “These results take the pressure off of me to keep the sodium high. It is one less thing to worry about in children with DKA.”

These questions were asked during the Fluid Therapies Under Investigation in Diabetic Ketoacidosis (FLUID) trial done at 13 PECARN centers across the United States. The FLUID trial determined that the type of fluid regimen used did not significantly impact neurological outcomes. In fact, contrary to what might have been expected based on previous theories about causes of cerebral injury during DKA, the point estimates favored more rapid fluid infusion. Children in some more severely ill subsets actually had significantly better mental status during DKA with more rapid fluid infusion.