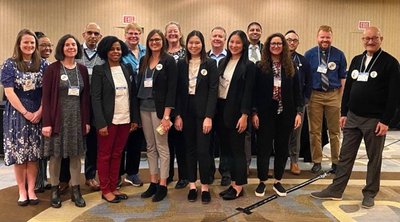 The West/SW Pediatric Emergency Medicine Research (WPEMR) Node, also referred to as the West node, is the newest member of the Pediatric Emergency Care Applied Research Network (PECARN). PECARN, EMSC’s research arm, encompasses 18 pediatric emergency departments and nine EMS programs across the United States. Working together, these collaborators conduct multicenter pediatric emergency research across the continuum of emergency medicine care—from the scene to the hospital—answering important questions to improve care for children with illness and injuries.

“WPEMR leverages research and content expertise to foster partnerships and to design and implement high quality equitable research that improves health outcomes for children across the continuum of emergency care.”

Immediately after joining PECARN in fall 2019, WPEMR jumped in to participate in ongoing research and propose new research projects for the network. Mentorship—a critical piece of the partnerships in the nodal mission statement—became an early focus and strength. Supporting and mentoring the next generation of pediatric emergency care researchers is critical to the success of the node and to the future of pediatric emergency medicine research.

“We strive to develop new research leaders and to generate innovative and impactful research ideas, leveraging the outstanding infrastructure and opportunity that PECARN affords our future investigators in taking the next step forward in their research careers,” says Klein. “Furthermore, the expertise, experience and commitment of our nodal leaders will foster long-lasting relationships and career development for our future investigators.”

Below, learn about ways WPEMR has mentored investigators to bring new ideas and energy into PECARN and meet its rising new researchers.

One goal of WPEMR is to give future investigators the opportunity to serve as site PIs for current PECARN projects and provide support for success as they move forward in their research careers. One example is the newly initiated “ProMPT BOLUS” study. The study will help determine the best intravenous fluid option for treating children in the emergency department with severe infections (sepsis). Reflecting on this opportunity, Jeannette Dodson, MD, University of Texas Southwestern Site PI for the PRoMPT BOLUS study, says, “This group has been cheering me on every step of the way during the study startup process and giving guidance regarding the details of the study.”

The upcoming “PediDOSE” study focuses on improving care for children with seizures in the field by standardizing medication dosing by paramedics. PediDOSE represents another opportunity to mentor new PIs, fostering career growth and providing wider opportunities for physicians to perform high-quality research and care. As Neil Uspal, MD, Seattle Children’s site PI for PediDOSE and ProMPT BOLUS studies says, “Working within WPEMR, I have connected with outstanding colleagues and mentors both within and outside my institution. The mentorship I've received has allowed me to take on a leadership role at our site conducting important research that will impact pediatric emergency care." PediDOSE has also represented an opportunity for investigators who focus their research on the prehospital setting. Andrew Latimer, MD, Seattle Fire site PI for the PediDOSE study, adds: “I have greatly enjoyed the mentorship I have received through the PECARN network and WPEMR node as a junior EMS investigator. It has been integral to my career growth as an academic prehospital physician."

WPEMR is committed to providing mentorship by supporting investigators at all points in project development, and the node is excited to help mold new ideas into important and answerable questions that are feasible to study. Michael C. Cooper, MD, from University of Texas Southwestern Children's Medical Center, participated in the PECARN Future Investigators meeting in February 2021. According to him, “WPEMR so far has given great feedback for my project proposal, helping me to develop a feasible plan to get the bronchiolitis ultrasound study started.”

Supporting the growth and development of junior investigators on their way to becoming independently funded scientists is essential to create the next generation of leaders in pediatric emergency research. The pathway to doing so begins with mentored research awards to gain experience and expertise before obtaining larger grants as principal investigators. Pradip Chaudhari, MD, of the Children’s Hospital of Los Angeles and one of the nodal investigators, has already been awarded an internal mentored award to evaluate intracranial bleeds due to trauma. Chaudhari says: "the extensive mentoring and direct support from our WPEMR node directly impacted the success of my KL2 grant submission. Participation in our nodal activities has accelerated my career development through mentorship and experiential learning." Jeanine Hall, MD, of the Children’s Hospital of Los Angeles, another future investigator, is applying for a diversity supplement to an ongoing PECARN study of headache management in the ED. According to Hall, “The connections to pediatric emergency researchers with a dedication and passion for supporting the next generation of PEM researchers has been amazing. The willingness of my node to provide sage advice, continuous feedback, and to make the time commitment to see me succeed in my pursuits in health services research has been awe inspiring and greatly appreciated.”

Building on the concept of developing future research leaders in pediatric emergency medicine, WPEMR is also committed to collaborating with investigators who are at institutions outside of PECARN and providing opportunities for support and participation. Jennifer Fishe, MD, at the University of Florida in Jacksonville, is one such individual. After receiving an NIH award, Fishe was working to recruit EMS agencies to study providing oral steroids to children with asthma in the prehospital setting. Through engagement with our node and with support from PECARN, Fishe was able to recruit seven EMS agencies to participate in her project. Fishe says the mentorship from WPEMR has enhanced not only her career but also provided the resources needed to answer important questions to improve care for pediatric asthma patients: "The support and mentorship of the WPEMR node, particularly Dr. Eileen Klein, has been tremendously helpful in facilitating and expanding my research. My original hope was to conduct a small pilot study, but thanks to WPEMR and PECARN, we now have a large study with seven sites nationwide and over 1,000 patients. Now we are moving forward, seeking answers for EMS agencies wondering if they should incorporate oral steroids into their protocols for children with asthma. I'm very grateful to be able to participate in the WPEMR node.”

Says Klein: “The WPEMR node is thrilled to be a member of PECARN, to be part of a group that answers questions to improve the care of ill and injured children, and to mentor the next generation of pediatric emergency medicine researchers.”